MAKING THE ENVIRONMENT HEALTHY
Inside and out 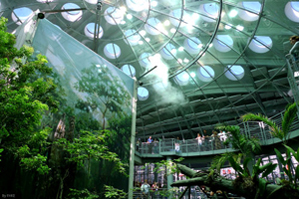 Known not only for its dedication to studying and educating society about the natural world, but also for its efforts to protect it, the California Academy of Science planned for major renovations to its facilities. It was the Academy's hope to build a unique learning environment that made a statement about both the history of the natural world and the things we can do to improve it.

Established in 1853, the California Academy of Science's original 12 buildings were located in Golden Gate Park, San Francisco, Calif., and housed an extensive collection of specimens, a leading research facility, a planetarium, and an aquarium. It had long been one of the world's largest museums of natural history, but the 1989 Loma Prieta earthquake caused extensive damage to many of the buildings, forcing the closure of several of them to the public. As renovation planning began, it was decided that the new facility would consist of a single structure, uniquely designed to complement and flow with the natural beauty of the surrounding Golden Gate Park. Additionally, because of the museum's commitment to sustainability, it would also be designed to achieve the highest LEED certification standard possible'Platinum.

The new structure would house a variety of exhibits, including an improved aquarium and planetarium, a man-made rain forest, and the natural history museum, as well as a new research laboratory. The result was an immense diversity of environments throughout the building that requires constant control of humidity and temperature to help preserve fragile specimens, as well as to keep plant and animal life (including humans) comfortable. Central to the project were the boilers and while the boilers selected had to handle the massive load the multifaceted heating system required, they also had to reflect the Academy's environmental stewardship and be in line with today's exacting standards for efficiency.

To meet these high standards'and to address the building's specification for a cast-iron boiler system made by an American-based manufacturer' the mechanical team of Karl Lyndon (Mechanical Engineer, ARUP Engineering, San Francisco, Calif.) and Armand Kirjain (Mechanical Contractor, O'Brien Mechanical, San Francisco, Calif.) contacted the experts at California Hydronics Corporation of Hayward, Calif., a leading manufacturer's representative for ATH Boilers and ultimately selected the ATH KN Series, specifically the KN20 (2000 MBH). 'It was the natural choice for this project,' stated Karl Lyndon. 'The KN20 has numerous attributes that make it the perfect fit for heating the California Academy of Science.' The system consists of six KN20s all interconnected and controlled through HeatNet, its internal boiler management system. The series of boilers provide ace and radiant floor heating throughout the structure, as well as heating for the aquatic exhibits by way of plate and frame heat exchangers. The KN Series was the clear choice for numerous reasons, including its control and application flexibility. 'First and foremost, however,' said Armand Kirjain, 'is its efficiency. The Academy is focused on green thinking and the KN Series' ability to operate at an efficiency of up to 99% at full turndown really makes a difference in terms of energy consumption.'

Lyndon indicated that being able to design a multiple-boiler configuration using six KN units allows for greater system control and resiliency which is a necessity when dealing with heating needs as diverse as those of the California Academy of Science. 'And of course,' he added, 'the KN20 is an American made, cast-iron condensing boiler, which means we met the boiler requirements specified.'

Even Kirjain had his own reasons to be pleased with the KN-20. 'The design of the KN20 boilers made them simple to install. The units' components were easily accessible and the compact footprint allowed for flexibility with the final positioning and piping process.' From start to finish, the complete system installation, including piping, setting the boilers, and coordination with other trades, took roughly two months. 'Everyone involved with the construction is very pleased with the system we put in place,' said Kirjain. 'It's really exciting to know that these six boilers are an important part of what is quickly becoming one of San Francisco's iconic landmarks.'

With finished costs for the amazing structure totaling $488 million, the California Academy of Science reopened its doors on September 27, 2008, and is considered to be at the forefront of 'green' building design. From its 2.5-acre natural roof lined with photovoltaic cells to the aquatic environments heated by the KN20, the Academy successfully delivered the environmental and architectural message it set out to make and has received several design awards including the Urban Land Institute Award for Excellence, the Holcim Silver Award for sustainable construction projects and of course, LEED Platinum.