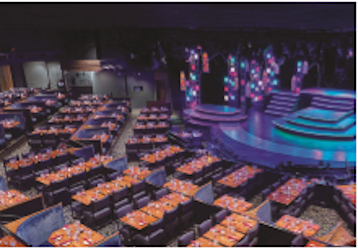 In 1968, Herb and Carol Bloomberg carved a theater out of a cornfield in a not-quite-yet-suburban-area outside of Minneapolis-St. Paul. At the time the town consisted of a gas station, lumber yard, a supper club, and a few homes. Forty years and 10 million patrons later, the Chanhassen Dinner Theatre (CDT) is the United States' largest professional dinner theater. The facility has grown considerably in size and is now a sprawling 90,000-square-foot entertainment complex with four stages. Six years ago, a group of investors teamed up to buy the company and breathe new life into it. While the dinner theater productions remain their bread and butter, over the last several years, CDT has expanded to include facilities to host weddings, banquets and concert series as well as a pub and comedy club. The production schedule is not only full, it's also varied, with musicals, concerts, dramas, comedies, one-person shows and ensembles all being performed on its stages.

The KN-10 was installed by Wright Plumbing & Heating of Colorado Springs, Colorado in November of 2004.

With the success of the expanded venues, the new ownership embarked on a major remodel to modernize the facility. The building had been built on a shoestring budget utilizing substandard and secondhand materials. One of the main areas for improvement was the theatre's mechanical systems. The original boiler system was nearly 40 years old and consisted of two 5000 MBH boilers of different brands that had been repurposed from other jobsites. They were oversized, inefficient and short-cycling often leaving the owners with high heating bills. The system often times required extensive service to remain operational resulting in substantial maintenance fees.

The team contacted Corporate Mechanical who consulted with Mulcahy Company to design a system for the CDT. Together they met to get a better feel for the requirements of the job so they could best select a system to meet the needs of the dinner theater. First and foremost, the owners hoped that the installation of a technologically advanced heating system would provide a substantial energy savings. And, as a consumer entertainment business, reliability also topped the list of requirements. Since the theater had actually been built around the original boilers, the ability to fit through the doorway was a critical consideration. Paul Frank of Mulcahy Company reviewed the jobsite and calculated the heating load of the building. The current system had the hot water running at 180°F directly to the heat exchanger with it dropping immediately to 160°F. Frank knew that if they could run 160°F water on the coldest day of the year, they could likely run the boilers much cooler on most any other day of the year. This was a good indication that they could take advantage of the efficiency offered by a condensing boiler. After sizing the building and viewing three years of gas usage history, Frank recommended two 1,000 MBH Advanced Thermal Hydronics KN-Series Boilers.

Corporate Mechanical had installed several KN-Series boilers in the past with good results and they once again seemed to be a good choice meeting the needs of CDT with their ultra-high efficiency, small footprint and robust cast iron construction. The CDT owners agreed that the 21-year thermal shock warranty certainly made the KNSeries Boilers a worthy investment. The team from Corporate Mechanical and Mulcahy further explained how the KN-Series with its integrated boiler control platform, HeatNet 3.0, would provide a state-of-the-art boiler management system that would not only optimize operating efficiency but would also allow them to have remote monitoring capabilities through HeatNet's Online system giving them complete peace of mind, 24/7/365.

Once start-up was complete, Mulcahy Company worked with the Corporate Mechanical and CDT building management to configure the HeatNet 3.0 control to optimize system performance. "The building load matches the boiler output perfectly, even better than anticipated, " said Joe Mozeika of Mulcahy Company. "HeatNet 3.0 is modulating the boilers so well that they are only cycling once per day for a flame check," Mozeika added. Additionally, the compact units gave the owners nearly 50% more floor space in the boiler room.

"We are extremely satisfied and impressed with the KN Boilers," said Wegler. "We are saving nearly 20% on our gas bills and our maintenance and labor costs have dropped by over 50%." As for the maintenance engineers, they are enjoying the monitoring and notifications provided by HeatNet Online as well as the peace of mind to sleep at night.